This week’s WAWA is non-running focused.  Instead, we’re mostly concentrating on the upper body and strength.  I’ll set up four stations as follows:

Participants will be divided up on the four stations.  Station 1, the Suicide Push Up drills, is our limiting station.  This means all the other three stations will continue to work out until Station 1 is complete, at which point that individuals yells “rotate”.  Station 1 goes to Station 2; Station 2 goes to Station 3; etc.

We’ll do each rotation three times, with breaks in-between.

Here’s further explanation on the stations:

Cones are set up approximately 5 meters apart as shown below.  Participants will run to first cone, then back, then do 1 push up.  Then participants will run to the second cone, then back, the do 2 push ups.  Participant will do 5 pushups after the circling back from the farthest cone.  At that point, push ups 6, 7, 8, 9, and 10 are each done after only going out to one cone and back. 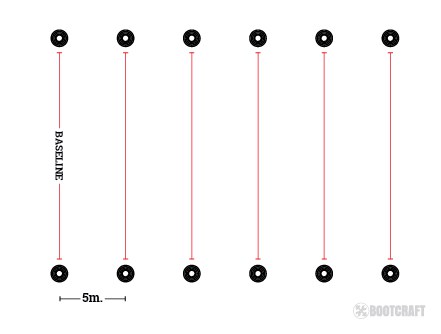 The team on this station should repeat the following exercises in a circuit non-stop until it is time to go to the next station.

Two cones will be placed 10 meters apart.  Participant or team will do one burpee, then run to the opposite cone.  Then conduct another burpee and run back to the first cone.  Keep repeating that “loop” until Station 1 yells “rotate”.

Similar to the burpee station, the participant or team at this station will continue to rotate through the exercises until Station 1 yells “rotate”.